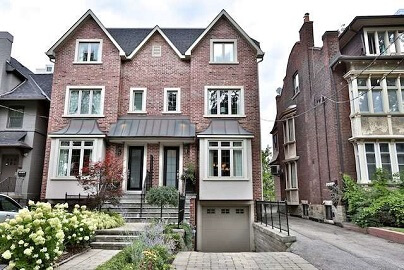 The name dates from 1837, when the Heath family purchased 40 acres (162,000 m²) of land on the northwest corner of Yonge and St. Clair (then the Third Concession Road) and named it Deer Park. By the 1850s the neighbourhood included a racetrack, a school, and a hotel at which patrons could feed deer which roamed the Heaths' property. The Heath property was subdivided in 1846 and was entirely sold off by 1874. In 1891 Upper Canada College moved from its urban location to the then still rural Deer Park area, establishing a large campus that remains in the same location today, interrupting Avenue Road north of St. Clair Avenue.

Deer Park was annexed by the City of Toronto in 1908, and by the 1930s it had become an upper-middle class residential district, which it remains today. The intersection of Yonge and St. Clair is also the site of extensive nodal commercial development. Deer Park is also home to one of Toronto's oldest cemeteries. St. Michael's Cemetery (Toronto)‎ was opened by the Roman Catholic Archdiocese of Toronto on September 28, 1855. There are some 29,000 graves in the cemetery. Ten acres in size, St. Michael's has the unusual characteristic of being surrounded on all sides by the backs of buildings, thus making it nearly invisible from the street.

Deer Park today is an upscale neighbourhood with a varied mix of homes, townhouses and condo-apartments. Unique to the area is its proximity to Yonge St. and St. Clair Ave., one of the busiest shopping, entertainment and business districts in the city. Further defining this neighbourhood is the surrounding lush green parkland, majestic trees, and the Vale of Avoca Ravine

The neighbourhood boasts a unique mix of detached homes and semi-detached homes, townhouses and luxery condominiums. Most homes in Deer Park were built between 1875 and 1920. The condominiums have spectacular views of the park, ravine and city. Noatable homes in the area include 42 Heath Street West. After a stakeout, Canada's most notorious bank robber of the day, Edwin Boyd, leader of the Boyd Gang, was captured in this house at 6:00AM on March 15, 1952. Even Toronto's mayor of the day, Allan Lamport, got into the act, escorting Boyd out of the house accompanied by Sergeant Adolphus (Dolph) Payne of the Toronto police force.

The Yonge and St. Clair shopping district has a good mix of higher-end clothing stores, restaurants, pubs and specialty stores. Most of the local staple and grocery stores are located inside the St. Clair Centre (home to over 35 shops) and The Towne Mall or at the Delisle Court. This area is perfect to find a bit of downtown, uptown.

The Rosehill Reservoir Park, on Pleasant Boulevard, is one of Toronto's prettiest parks. Wrapped around the park is a surfaced path that's ideal for walking, jogging, and cycling. The top tier of the park has a large children's playground and a wading pool. This part of the park is also decorated with a water fountain, a reflecting pool, and a waterfall. Next to the Rosehill Reservoir Park is the David Balfour Park which includes a hiking trail through the wilderness of theVale of Avoca Ravine. Oriole Park is located at the northern tip of Deer Park. It has a playground, a wading pool, two tennis courts and access to the 'Belt Line', a seven kilometre path that follows the route of Toronto's old Belt Line Railway. 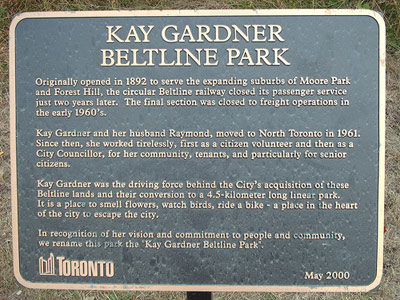 The St. Clair TTC subway station is within walking distance of every home in Deer Park. Motorists are approximately ten minutes from downtown, and twenty minutes from Toronto's Expressways and Highways.

Photos of the Belt Line trail featured on this page are courtesy of David J. Widmann and are protected under Creative Commons.