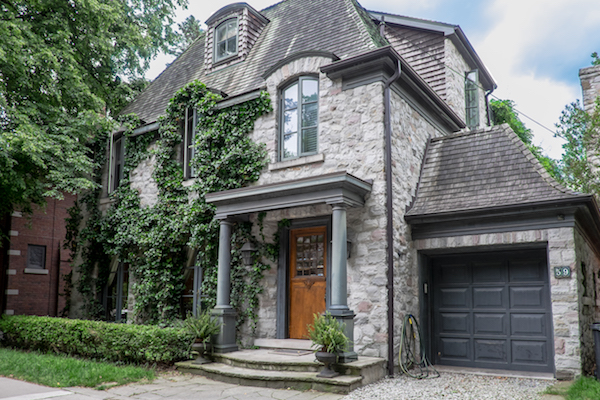 The neighbourhood is divided into a north and south portion by the Park Drive Ravine. South Rosedale was first settled by Sheriff William Jarvis and his wife, Mary, in the 1820s. Mary Jarvis, whose frequent walks and horseback rides blazed the trails for Rosedale's meandering streets (which are one of the area's trademarks), named the area 'Rosedale' as a tribute to the abundance of wild roses that graced the hillsides of the Jarvis estate. The Jarvis Family sold the Rosedale homestead in 1864, which led to the residential development of the area soon after. North Rosedale's development began after the construction of a bridge across the Park Drive Ravine, in 1909.

Prior to its development, North Rosedale was the home of St. Andrew's College (1899-1924), an all-boys boarding school (which has since moved to Aurora, Ontario) and the Rosedale Golf Club. The golf club was also home to a lacrosse field (Rosedale Field) and site of the first Grey Cup game.

Rosedale today is one of Toronto's oldest suburbs. It is also one of the wealthiest and highly priced neighbourhoods in Canada. It is known as the area where the city's 'Old Money' lives, and is home to some of Canada's richest and most famous citizens.

Even though Rosedale is located in the middle of Toronto, virtually no vehicular traffic can be heard due to the abundance of trees and foliage that surround the community. The homes are mostly single family detached dwellings.

Rosedale's Victorian, Georgian, Tudor, and Edwardian style mansions were built between 1860 and 1930. Many Rosedale homes are listed on the Toronto Historical Board's Inventory of Heritage Properties.

South Rosedale also contains a number of condominium, co-operative, and co-ownership apartment buildings. These apartments are surprisingly affordable and provide a good entry into the neighbourhood.

Rosedale residents living west of Mount Pleasant Road are within walking distance of the upscale shops and restaurants, located on Yonge Street, in the Summerhill area.

North Rosedale residents, east of Mount Pleasant Road, can obtain all of their household needs within a small commercial block on Summerhill Avenue, at the very north end of Rosedale.

Bloor Street with its plentitude of shopping, dining and entertainment is within walking and driving distance of most homes.

Rosedale is traversed by a network of ancient ravines, including the Vale of Avoca, Moore Park, Park Drive and Rosedale Valley ravines. The beautiful trails in these ravines are enjoyed by nature, and fitness enthusiasts alike. Access points to Rosedale's ravine trails are located at designated spots throughout the neighbourhood.

Mooredale House, at 146 Crescent Road, is a community centre run by the Rosedale and Moore Park resident associations. There is a small annual fee to join Mooredale, which offers sports, fitness, arts, and music programs for adults and children.

Buses serving Rosedale run on South Drive, Crescent and Glen Roads, as well as Summerhill, Maclennan, Highland and Elm Avenues. These buses connect with the Rosedale station on the Yonge-University-Spadina subway line or the Sherbourne station on the Bloor-Danforth subway line.

Motorists are just minutes away from the Don Valley Parkway, as well as the major roads of Bloor St. and Yonge St.